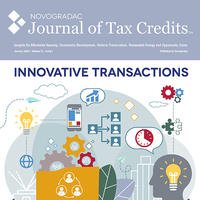 As a new decade begins, there is value in contemplating opportunities for using the 20 percent federal historic tax credit (HTC) program in real estate redevelopment.

From a financial perspective, the program is very attractive. It is a program by right in that if you meet program requirements (i.e., a certified rehabilitation of a certified historic structure), the HTC is available. There is no competition for the credits and there is no cap on the credits, either by project or by annual allocation. The credit is not limited by use, scale, structure or location. It is a program that–allowing for the occasional design challenge–can often be partnered with other funding sources, such as the opportunity zone incentive, new markets tax credits, low-income housing tax credits (LIHTCs), brownfield incentives and as part of the U.S. Department of Housing and Urban Development Rental Assistance Demonstration, as well as with complementary state and local incentives.

This situation has fostered a number of very interesting trends:

State HTCs can be now found in 37 states. Many of these programs are intended to work seamlessly with the federal HTC. While it is not quite accurate to say that the benefit is doubled, many developers aggregate the credits conceptually. State programs have proven to be a big HTC accelerator–particularly where the credits are not competitive and where there is no per-project cap or annual limits to allocation.

The traditional 50-year cut off for the National Register is now 1970. From the mid-1950s to the mid-1970s was a time of incredible urban construction with a new generation of bigger, taller skyscrapers, as well as new suburban building forms. These buildings are now National Register-eligible in terms of age and HTC potential.

Simultaneously, a structural shift in the American economy away from manufacturing has resulted in an ever-growing number of large industrial complexes that historically played a critical role in the local economy but are now outmoded and ready for new mixed uses. On a lesser scale, changing values have resulted in more and more vacant institutional buildings such as schools and churches.

Affordable and public housing developers are becoming increasingly creative. The model of combining HTCs with the 9 percent LIHTC has been in use for years. RAD has been a boon to public housing redevelopment, often combining seamlessly with federal and state HTC. At the same time, some affordable housing developers are foregoing the competitiveness of the 9 percent LIHTC and instead using the more predictable 4 percent LIHTC, supplemented by state tax credits.

A major driver in urban redevelopment has been adapting downtown office buildings for hotel use. The importance of location has played a critical role. As important, hotel developers and brand managers are increasingly seeking to capitalize on unique and local authenticity. This has tended to move hotel design away from a cookie-cutter approach toward a more preservation-friendly flexibility.

For developers without experience in the HTC program, there can be concern regarding potential design limitations. This concern is more perception than reality. The National Park Service (NPS), which is responsible for reviewing and approving HTC work, is primarily focused on the preservation/treatment of historic material and the aesthetic compatibility of renovation design and new construction. Typically, the more visible an element on a building, the greater the scrutiny by NPS. For example, exterior and public space treatments are more important to the NPS than remote interior spaces. Ironically, although the installation of new systems (e.g., mechanical, plumbing, electricity, telecommunications, and fire and life safety) are often hefty budget items in a rehabilitation project (and typically qualify for HTCs), within limited parameters (such as whether ducting is exposed or buried) NPS review tends to take a light hand in this realm.

The Sinclair (Fort Worth, Texas)

Located in downtown Fort Worth, the 16-story Sinclair Building was built in 1929. Designed by local architect Wiley Gulick Clarkson, the building is a classic Art Deco “skyscraper” adorned in zigzag motifs with Mayan-styled detailing. The building has a stepped design typical of skyscrapers of the era. On the interior, the building has a highly ornamental first-floor lobby, replete with green marble-paneled walls and stepped zigzag style plaster ceiling. The upper floors feature ornamental marble-paneled elevator lobbies and corridors. Built by local oilman Richard Otto Dulaney, the building was nearly fully preleased to the Sinclair Oil Company and its name was changed to reflect the primary tenant.

Unable to compete with modern office space located in downtown Fort Worth, the building was tired and was primed for rehabilitation when it was purchased by Sinclair Holdings LLC in 2015. Recently, following a four-year rehabilitation, the Sinclair Building opened as a 164-room full-service Marriott Autograph Collection hotel known as “The Sinclair.” On the exterior, the cast-stone façade was repainted, historic windows were repaired and retrofit with insulated glass, and historically appropriate entrances were installed. Within the main lobby, the historic marble paneling and plaster ceiling were retained and a new hotel lobby and restaurant were created in the flanking retail spaces. Within the tower, the existing historic finishes within the elevator lobbies and corridors were retained with missing vaulted ceilings reconstructed and guest rooms were installed around the perimeter. At the roof, an enclosed lounge was constructed to provide unobstructed views of downtown Fort Worth.

While the rehabilitation stands on its own merits due to the aesthetic appeal of the building, it features an innovative design that is not readily discernible to the casual observer. Since electricity began powering our world, lights and equipment have run on high-voltage AC. Over the past decade with the evolution of telecommunications technologies, there have been significant advances in low-voltage and DC power, though this has rarely been used on a large-scale beyond powering telecommunications equipment such as Wi-Fi hot spots. That said, low-voltage power has become more practical due to the growth and efficiency increases in LED lighting and advancements in other technologies that do not require standard electrical service.

Unique to the Sinclair is the use of low-voltage power to light the building, operate all motorized window shades and blinds, and power all the minibars and smart mirrors. While traditional 110-volt outlets were installed for televisions, large appliances and the in-room air conditioning units, the lights and many other devices throughout are instead supplied with Cat-5 wiring, similar to an office or home internet setup that uses Power over Ethernet (PoE) technology. This not only increases the efficiency of the devices, but also connects them to a network, which can be monitored and controlled. Lights and window curtains are controlled by touch pads in each room that have the appearance of modern cellular phones. Similarly, showers are controlled by similar touch panels–which allows the guest to control water temperature and flow. As an added nod to energy efficiency and the “green movement,” the building’s electrical system is backed up, not with a standard Diesel generator, but with a lithium ion battery, which can power the building for up to three hours should outside electricity fail. This system is the first to be implemented on this scale and its technology is looked upon as the future of environmentally friendly design.

As discussed in this column in the past, the 20 percent federal HTC program has been an exceptionally effective and successful federal program. In purely financial terms, as reported in the most recent annual HTC report (2018) by the NPS and Rutgers University, the cumulative effects for the period of fiscal year (FY) 1978 through FY 2018 are illustrative. During that period, $162 billion in HTC-related rehabilitation investment created 2,677,000 jobs and $176.2 billion in gross domestic product.

If anything, the trend since 2018 has been positive. The HTC remains a critical incentive for the revitalization of cities and towns, one that can easily be paired with other incentives and opportunities. The next decade will likely be a continuation of not only traditional HTC projects but larger, more complex and more innovative projects as the post-war building stock comes of age.